Transformers: Dark of the Moon[d] is an action-adventure video game which was released on June 14, 2011 in North America. The Wii and the 3DS versions are different to the Xbox 360 and PlayStation 3; there is also a DS version that was also different to the console and Wii and 3DS versions. Transformers: Dark of the Moon was revealed on February 12, 2011 along the release of the trailer for the game.[4] The PlayStation 3 and Xbox 360 versions of the game were developed by High Moon Studios who previously developed Transformers: War for Cybertron[5] while the Wii, Nintendo DS, and Nintendo 3DS versions were developed by Behaviour Interactive. The game features a mode known as 'Stealth Force' in which characters only partially transform from their vehicle mode. Weapons protrude from the vehicle form and more precise controls are available, such as strafing, airplanes also use this Stealth Force.[6]Electronic Arts released mobile incarnations of the game for Symbian, iOS and BlackBerry.

The game takes place three years after Transformers: Revenge of the Fallen. Bumblebee is sent somewhere in South America to plant Wheeljack's virus to a Decepticon transmitter that is listening to the Autobots' transmissions with NEST, which he does with the assistance of Optimus Prime and Sideswipe. Then, in Detroit, the city is attacked by a small army of Decepticons led by the Constructicon Mixmaster. Autobot second-in-command Ironhide is sent to destroy all Decepticons with the help of medical officer Ratchet. Ironhide kills most of the Decepticons and Mixmaster with an experimental rocket launcher, which was given by Wheeljack. Somewhere in South America, Sideswipe disappears in the jungle so Mirage is sent to meet Bumblebee, but he encounters the vicious Decepticon second-in-command Starscream and is knocked out by him by getting thrown through a bridge. Mirage wakes up to find himself in the jungle after being knocked out and does not have his ability's to transform and use his weapons, but he does gets his abilities back after sneaking to a crashed NEST helicopter and get a supply drop containing his weaponry. He does find Sideswipe with the help of Bumblebee. Meanwhile, Megatron orders Soundwave to go to a former Sector Seven base on an island with Laserbeak. They find knowledge of a crash on the moon during the 1960s and an advanced technology called MechTech, which Soundwave destroys by triggering a volcanic eruption before escaping the base. Starscream is sent to Nepal to find and destroy the remaining MechTech that is about to be airlifted by the massive Aerialbot named Stratosphere from a NEST facility somewhere in the snowy mountain range. Then, he fights the other Aerialbots, consisting of Air Raid, Breakaway and Silverbolt. Starscream mercilessly kills them, along with Stratosphere who is carrying the technology and takes a piece of the MechTech. Starscream returns to the Decepticon base in Siberia, but he doesn't know that the Autobots put a tracker on the weapon he took. The Autobots invade the base and while that is happening, Megatron gets a truck mode and fights and kills Warpath, the Autobot brute who transforms into a tank. Megatron then finds a cryotube holding a frozen Shockwave, the infamous Decepticon assassin and scientist. Meanwhile, he fights Optimus Prime, eventually taking him down and kicking him into a pit holding Shockwave and the Driller, a giant worm-beast like robot who only works under Shockwave's command. Prime fights both of them before they flee. Optimus then claims that the battle is won, but he knows that the war is far from over. Somewhere in Africa, Megatron and the Decepticons meet and launch 'Operation Pillar'.

Taking place three years after the events in Transformers: Revenge of the Fallen, the Autobots continue to hunt for the Decepticons despite humanity believing that they have fled the planet, defeated. Optimus Prime, Bumblebee, and Mirage head to a desert to test out the new 'Stealth Force Mode' upgrade given to them by the Autobot scientist Wheeljack. After finishing up, Optimus tries to contact N.E.S.T. headquarters, but something jams his link to them. Bumblebee is sent to infiltrate a Decepticon base also located in the desert to find out why. He discovers that the Decepticons are using satellite dishes to jam the Autobots communications. After shutting them down, Bumblebee heads inside the base to scout it out, but his link with the Autobots is lost, prompting Optimus to go in after him, blasting down the door to the base after a brief fight.

Wheeljack tasks Optimus to plant an upload virus into three satellites so the Autobots can learn the Decepticon's motives, and ends up trying to protect them from the Decepticons. The upload is a success and Optimus ends up fighting the Decepticons for five minutes until Bumblebee escapes the base and Stratosphere arrives to pick them up. The Autobots had escaped and learned that the Decepticons are plotting an attack on Detroit, Michigan and are involved in a project called 'Operation: Pillar' and Megatron is interested in something or someone called 'Shockwave'. In Detroit, Soundwave and the Constructicon Mixmaster lead a full-scale assault on the city, with Ironhide as the only Autobot in the area.

Soundwave deploys Lockdown to attack the Autobots and to infiltrate the base, where Lockdown targets the mainframe terminals to upload a virus created by Mixmaster. Meanwhile, Ironhide protects some satellite dishes from the Decepticons and learns that Mixmaster is trying to bring the rest of his former teammates back online and to reform Devastator. After destroying the components and killing Mixmaster, he battles Soundwave, who is being aided with aerial support from Starscream. After a brief fight, Soundwave ends up defeated and flees. Optimus calls Ironhide to return to the headquarters and enters the Autobot base Lockdown entered. Starscream tasks Lockdown with destroying the controls for the main gate and escaping, all while avoiding Optimus. He succeeds and Starscream tells him to retreat, as Megatron has new orders for him to carry out.

The Autobots track the Decepticons to an abandoned base in Siberia, where Wheeljack informs Optimus and his team that Megatron is trying to reactivate his primary objective: Shockwave, who is revealed to be a deadly Cybertronian assassin. Optimus deploys Mirage to take out the Decepticon's communications and Ironhide to take out the shield that is protecting the base's entrance. Upon learning of the Autobot's presence, Megatron deploys Soundwave to hold off the Autobots while Megatron reactivates Shockwave. Soundwave ends up battling Mirage, who is being aided with aerial support from Stratosphere. Mirage ends up defeated and flees proclaiming, 'You got lucky! It won't happen again!'.

Megatron destroys the coils inside the base to speed up Shockwave's reanimation, which he succeeds in doing. Upon awakening, Shockwave tells Megatron that his energon levels are depleted, prompting Megatron to hold off the Autobots while Soundwave takes Shockwave to a safe location. After defeating multiple Autobots, Megatron learns that Shockwave's minion, a massive Cybertronian, multi-headed, metallic, worm-like creature called 'the Driller' has been awakened. Megatron tells Starscream to take the Decepticons and leave Siberia and decides to use the Driller to destroy Optimus.

Ironhide confronts Megatron as he is fleeing the base, having defeated Optimus. Against Wheeljack's warnings, Ironhide battles Megatron and defeats him, who admires him for having 'a warrior's spirit', and vows that when they meet again, he will crush it to dust. Wheeljack advises Ironhide to retreat and that they'll get Megatron next time, which Ironhide swears to accomplish.

In South Africa, Megatron, Starscream, Soundwave and Shockwave meet where Megatron tells Shockwave to head to Chernobyl to search for a certain ancient Cybertronian artifact.

The game, like its predecessor, consists of fighting enemy AIs or other players in multiplayer. It introduces a new feature called 'Stealth Force', which consists of even vehicles like Megatron's truck or Bumblebee's Camaro to use weapons while in vehicle form. In both vehicle and robot form, the character has access to two special abilities, which change when the player transforms. For example, Ironhide may have the ability to throw grenades in robot form, and a speed-up ability in vehicle form. There are three classes: Commander, Scout, and Warrior. Each have their own unique traits. For example, the Warrior might have more powerful attacks, but the Scout is faster, while the Commander might have more health.[citation needed] 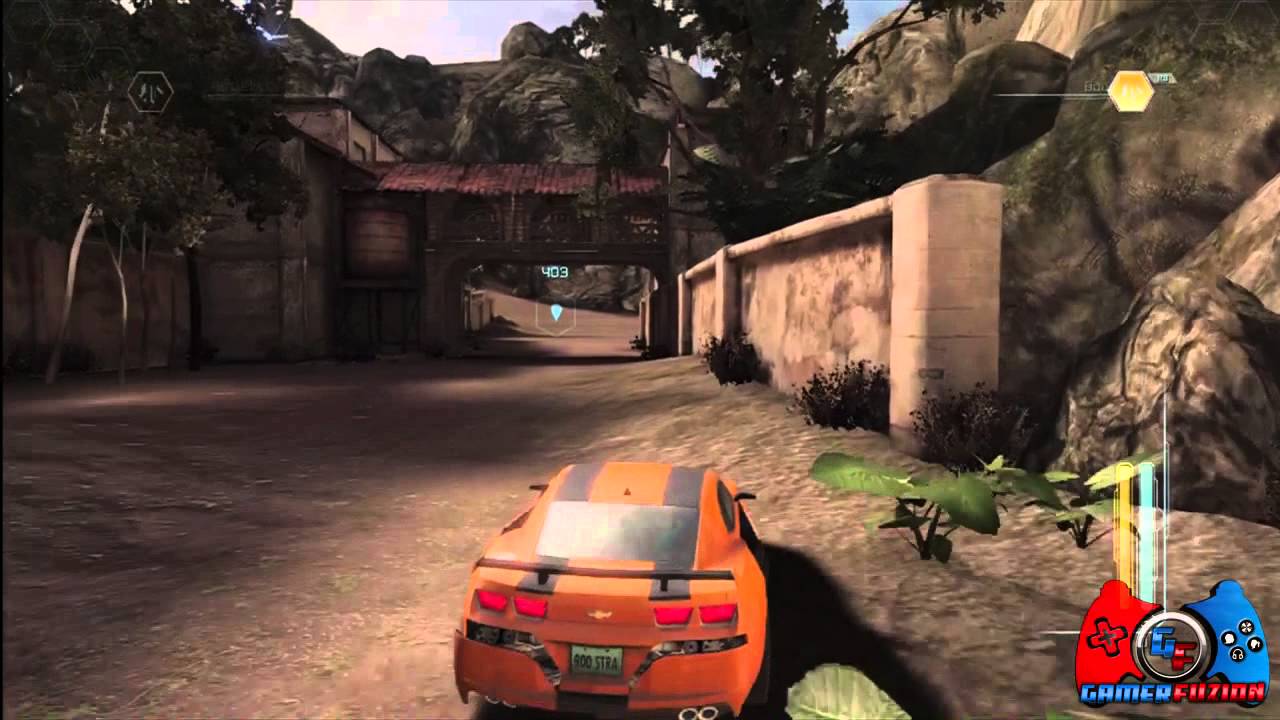 The original music score for the PlayStation 3 and Xbox 360 versions of the game was composed by Jeff Broadbent. The game soundtrack released on iTunes and Amazon November 8, 2011.

The title has received generally mixed reviews, with a score of 59 and 57 for the Xbox 360 and PlayStation 3 versions on Metacritic. GameZone gave the 360 and PS3 version a 7, stating 'Transformers: Dark of the Moon is a perfectly fine, if short, adaptation of the Transformers film. The characters are likable, and the different vehicle types work beautifully.' IGN gave the Xbox 360 and PS3 version a 6.0 of 10. Praising the ideas but criticizing the game as a whole. GameSpot gave 5.5 of 10. They praised the transformation abilities but criticized the bad graphics, strange vehicle physics and brief campaign.[citation needed]

Wii and Nintendo 3DS versions of the game received negative reviews, scoring 34 and 30 on Metacritic.[21][22]

Based on Beast Wars: Transformers[edit]

Games based on the Unicron Trilogy[edit]

Games based on the film series[edit]

Games based on Transformers: Animated[edit]

Games based on Transformers: Prime[edit]